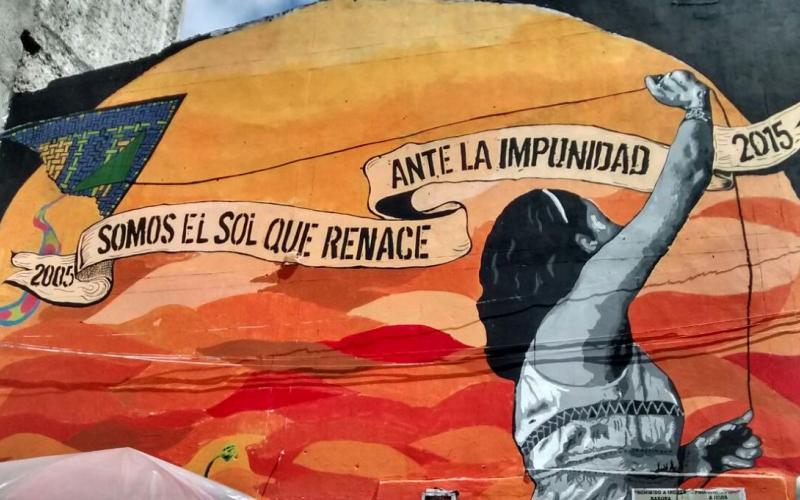 The Movimiento Nacional de Víctimas de Crímenes de Estado – MOVICE (National Movement of Victims of State Crime) is an organized movement composed of more than 200  organizations of victims of enforced disappearance, extrajudicial executions, targeted killings and forced displacement which supports organizations and human rights defenders. It was created 12 years ago and has a territorial presence in 15 departments.

The MOVICE was officially born on the 25th of June 2005 during the Second National Meeting of Victims of crimes against humanity, serious violations of human rights and genocide. More than 1000 delegates, 230 organizations and 400 regional representatives of 28 departments participated. However, the origin of this movement goes back to 1996 when various human rights organizations decided to create a Colombia Nunca Más (Never Again) movement. With this initiative the investigations began with the creation of methods for the analysis of information on State crime committed throughout the country.

The organizations that participated to the Nunca Más Colombia project:

In May 2000, the Seminar on Impunity took place. The same year, on the 25th, 26th and 27th of November the National Assembly of Victims took place and focused on the Project Nunca Más in Colombia which demands were that crimes against humanity needed to be regarded as State crime. These meetings focused on the idea that it was necessary to make progress on the themes of truth, justice and the integral reparation of State Crime victims in Colombia while taking into account processes that had been done in other parts of the world which have suffered similar traumas.

The First National Meeting of Victims of crimes against humanity and human rights violations  took place on the 28th and 29th May 2004. More than 1000 delegates, 230 organizations, 400 regional representatives of 28 departments participated. There was international support from delegates from 7 countries.

On June 27th 2005, during the Second National Meeting of Victims of crimes against humanity, serious human rights violations and genocide, the MOVICE was created. More than 800 delegates were present and there were also regional meetings in cities like Cartagena, Medellín, Cali, Popayán, Barrancabermeja, Bucaramanga and Bogotá.

The proposal to create the MOVICE at this meeting fits into a continuous movement of victims coming together. Indeed, it emerged in the midst of strong historical processes and therefore already had a substantial history. Also, it did not make out to deliver concrete results in predefined timelines but rather can be defined by its aims to advocate, organize and mobilize State crime victims and victims organizations with the following shared characteristics, objectives and beliefs :

During the Second National Meeting the MOVICE’s minimum binding requirements were defined. They were confirmed at the Third National Meeting of State Crime Victims which took place in September 2006 with the establishment of eight strategies for truth, justice, full compensation, memory and guarantees of non-repetition of crimes against humanity, strategies that are today the political epicenter of the MOVICE. They appeared in the final declaration as stated below:

Milestones of our history:

In 2007, human rights platforms and peace initiatives, including MOVICE, were convocated by the National Government for the creation of a Human Rights Action Plan which was suspended due to a lack of guarantees from the government at the time.

For this reason, in 2008, the MOVICE published their Comprehensive Policy of Human Rights: A proposition from victims of State Crimes based on discussions that took place during the 4th National Meeting of State Crime Victims as a way to “lay the foundations for finding an effective solution regarding human rights violations in the country and to counter the politics of war embodied in the so-called Democratic Security and all its consequences.”

In parallel, the March of the 6th of March 2008 “Victims’ fight is the entire society’s fight” was the message that enabled an unprecedented visibility of the State Crime victims in Colombia. This event caught the attention of the national and international community including mass media that broadcasted it in the majority of TV and radio channels as well as in newspapers. The MOVICE succeeded in obtaining the support of the Colombian society but this has not created a change in State policies on this matter.

On the other hand, there is the systematic covering up of State Crimes committed by State agents and paramilitary structures. In 2009, the scandal of extrajudicial executions of some young people from Soacha who had been presented in other regions of the country as soldiers who died on the field under “dirty war” dynamics came to light and the term “False Positives” appeared. After that, the 5th and 6th of March 2009 the “National Day of Denial of Extrajudicial Executions: false positives are State Crimes” took place and from that event a public declaration demanding justiciability of their rights and the public sentencing of crimes was published.

The State Crime Victims identify that the only real guarantees in the fight against impunity are the ability to organize, the strategies of action and assertion of the victims’ rights, the presence and solidarity of the international community and also the exhaustive documentation  produced by the Nunca Más Project in Colombia over the years.

We are seeds, we are memory and we are the sun rising against impunity.